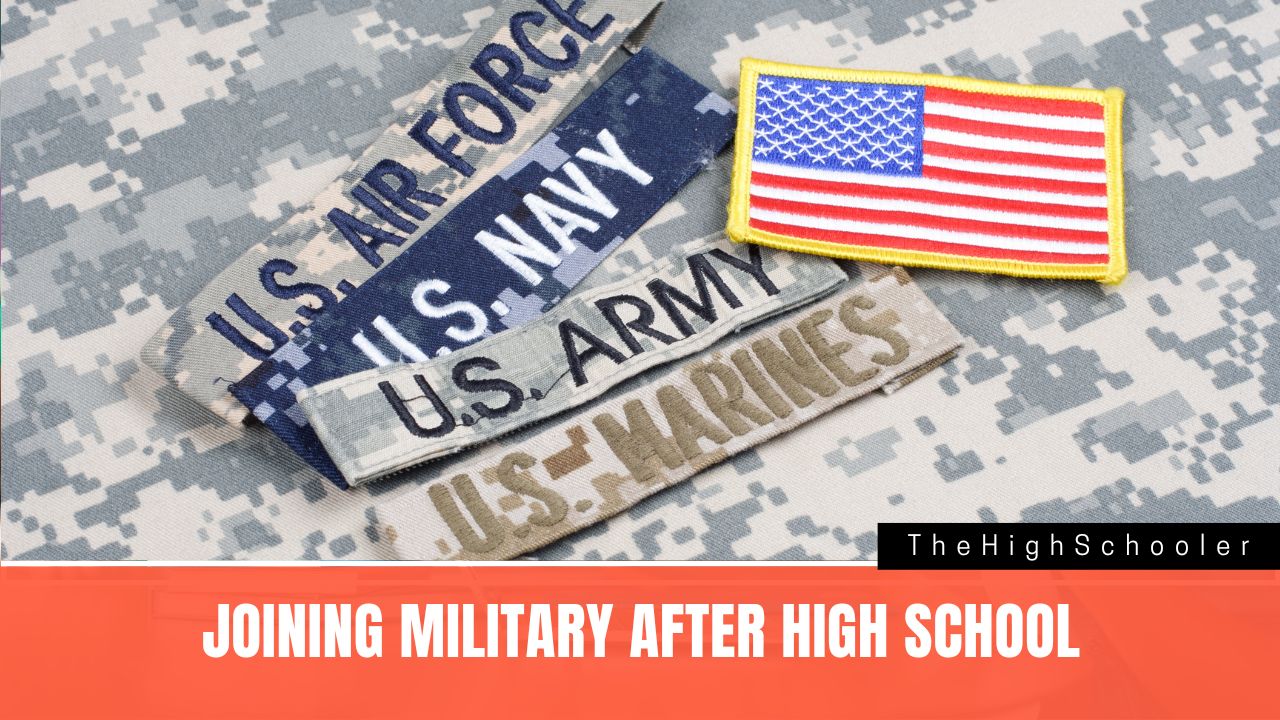 A significant accomplishment is completing high school. For the first time, you have the freedom to decide for yourself what you want to accomplish with your life rather than simply following orders. This could refer to anything from attending college to working overseas.

Many high school graduates think of joining the military after graduation in order to improve their chances of being able to afford a post-secondary education because the cost of tuition is at an all-time high and is only expected to rise.

They are also learning that serving in the military can provide them with a wealth of lifetime benefits and assist them in achieving a variety of other goals.

“Heroism doesn’t always happen in a burst of glory. Sometimes small triumphs and large hearts change the course of history”

Some of the key reasons of enlisting in the military after high school:

1. To Determine Your Goals

People witness an absolute transition from adolescence to adulthood between the ages of 18 and 29.

Finding your identity, deciding what you want to do, and figuring out how you fit into a world that is becoming more complex can be difficult when you are this age. It should come as no surprise that over half of all college students leave their studies before earning a degree, and those who do may decide to alter their major after completing, on average, more than four years of study.

The dropout rate is affected by a variety of factors, but many students leave because they are unprepared and may not be sure if they want to attend college or what they want to study.

For many people, joining the military after high school offers the ideal balance of independence and support that can help you establish yourself and find your purpose before possibly pursuing other professional routes in the future.

As the cost of a college education keeps going up, more and more recent high school graduates are considering alternatives to it.

In the most recent academic year, the average annual tuition bill for students at private colleges pursuing a four-year degree was close to $37,000, coming to just under $150k over the course of the programme.

This is before taking into account other costs like living expenses, textbooks, electronics, food, and travel. Even with need- or merit-based scholarships, students only receive a few thousand dollars in savings year.

Over the course of a person’s lifetime, excessive student loan debt can have a negative impact on many things, including the ability to buy a home, get married, and start a family. Graduating students who want to boost their income and pay off their student debt are taking employment outside of their fields of interest, working long hours, or even holding down several jobs.

Even though joining the military after high school doesn’t guarantee a future free college degree, it does offer major financial advantages for service members who do enroll in college as they are qualified for financial aid while on active duty or in the Reserves. This can pay for up to 36 months’ worth of tuition, fees, supplies, textbooks, and housing aid.

Each of the Army, Navy, Marines, Air Force, and Coast Guard—the country’s five armed services—offers training programmes that can boost both your military service and your civilian employment prospects.

It’s not only about fighting when you join the military after high school or at any age; many veterans go on to pursue a variety of professions such as journalism and media, engineering, the arts and photography, human resources, healthcare, aviation, and many more. You may earn college credits for your training and experience while serving in the military as an enlistee, and hundreds of institutions and colleges will accept these credits.

Additionally, you will have the choice to pursue professional and technical training, enabling you to obtain qualifications for positions in the private sector like software engineering as well as certifications, licenses, and credentials.

Employers frequently value candidates with military experience in addition to those with professional experience, as serving in the military after high school is likely to improve your leadership and teamwork skills, give you a structured, disciplined way of doing things, and help you develop your character in a setting more like the real world and that offers more hands-on education in these areas than a classroom can.

The prevalent perception of veterans is that they are reliable, trustworthy, and have a strong work ethic.

Pew Research published a research in 2019 based on data gathered over 40 years that claimed veteran families often have greater earnings and living standards.

The disparity is most noticeable in households led by people with lower levels of education and among racial and ethnic minorities.

This could be due to several factors, including that those who serve in the military after high school enjoy a strong level of job security, along with more opportunities for gainful employment as a civilian, thanks to the several professional skill-building opportunities afforded to them by military service.

All military personnel are qualified for a number of perks both during and after their time in the service. These consist of:

Enlistees typically begin their military careers with a monthly salary of $1,680 at the E-1 service grade, which rises to $2,194 after three years of duty after the E-4 level is attained. A cost of living adjustment is used to automatically increase the rates of pay from year to year.

Incentives and special compensation may also be available to military personnel depending on their qualifications, duties, and locations. For instance, extra money may be offered for learning a foreign language, performing dangerous work, or accepting a particular duty assignment.

Barracks on the site are available for military personnel who are single and have no children. You are entitled to additional compensation for sharing a single room, and if you reside off-base, you will get a tax-free housing allowance.

Every active-duty service member is entitled to a monthly food stipend that is tax-free and can be utilized both on and off base. During their first training, recruits also get a full set of uniforms and a clothing allowance to replace them when they get worn out.

All active-duty personnel are eligible for free medical and dental treatment under a programme called Tricare Prime. It is normally offered by a designated primary care physician who is usually situated at the base.

Veterans and active duty service personnel are both qualified for loans backed by the federal government when purchasing a property. The programme offers complete funding for houses that meet specified criteria.

The Army is the dominant force on the ground, and its major duty is to defend and advance the interests of the nation. Ground soldiers, artillery, armor, tactical nuclear weapons, helicopters, and other weaponry are used to accomplish this. The Continental Congress formally constituted the Army in June 1775, making it the earliest branch of the American armed forces. The Army National Guard and Army Reserves, which assist it and provide trained soldiers and equipment when needed, are the two biggest military services.

The Air Force, the newest arm of the military, was created after WWII, which demonstrated that airpower had a greater chance of defeating ground forces in a fight. The principal duty of the Air Force is to protect the nation and its interests by employing fighter, bomber, tanker, helicopter, and transport aircraft. Strategic ballistic nuclear missiles are under its supervision, and it is in charge of all military satellites.

The Continental Congress formally founded the Navy in June 1775, and like the Army, its major duty is to safeguard American maritime interests. Due to the fact that Navy aircraft carriers may frequently be utilized to deploy to locations devoid of a fixed runway during times of conflict, the Navy assists Air Force air power. While submarines are frequently used for stealth assaults, navy ships are built to strike terrestrial targets from great distances while deploying cruise missiles and powerful cannons.

The marines are experts in amphibious operations, and their main duty is to seize and maintain beachheads so that they may assault the enemy from any angle. Although the Marines were first created by the Continental Congress in November 1775 as a landing force for the American Navy, they have recently expanded their activities to include ground combat. With their own air force, the Marine Corps is mostly independent, although they rely on the Navy for administrative, logistical, and medical assistance.

The smallest of all the military services, the U.S. Coast Guard was first founded in 1790 as the Revenue Cutter Service. The Coast Guard’s main responsibilities during times of peace include law enforcement, maritime rescue, and boating safety.

If you decide to attend a military academy, you may have the opportunity to receive an elite military education before beginning a secure, fulfilling profession. The cost of your college education will also be covered, and each branch has an academy.

According to Forbes, students who graduate from the U.S. Naval Academy in Annapolis, Md., get free room and board as well as a monthly stipend. Afterward, their 5-year (at minimum) military commitment comes with a salary that starts at around $50,000 on average. Other branches of the service have their own academies. The Army’s, for instance, is West Point.

Or there are tuition plans that will enable you to pursue a college degree while still developing your leadership skills in a military environment. The Army’s ROTC programme provides four years of tuition aid in exchange for military service.

Graduates are given the rank of Second Lieutenant and are then qualified to start their Army careers. Graduating has its own benefits as well, such as savings on anything from movie tickets to cars. Even if you don’t choose to stay with the service or if you don’t choose to pursue an education and just join active duty, the military teaches you valuable skills and sets you up for life afterward.

Of course, there are some disadvantages to joining the military. One is that, according to FOX23, budget sequestration has resulted in a reduction in federal tuition assistance, the military programmes through which soldiers were financially supported to enroll in college courses.

This means that for the time being, children who enlist in the military but do not complete a particular college programme, such as ROTC or an academy, cannot plan on receiving financial help for college.

Whenever you enlist in the military, the branch you choose will decide all of your life decisions up to the end of your commitment. This may put you in danger and cut you off from your loved ones back home. They may detain you on a far-off base for several years or send you into conflict areas.

And it’s not impossible to pass away while performing one’s duties. Between 2003 and 2010, 4,365 people died while participating in Operation Iraqi Freedom, according to the Congressional Research Service.

Making a decision right after high school is especially difficult because it takes time to consider all the options.

Minimum commitment for joining the military is between five and seven years, but they might be much longer if you combine them with any prior education. So if you’re thinking about joining the military, think about what good you can do for yourself and your country, but also what else you might wish you were doing in five years before you sign the paperwork.