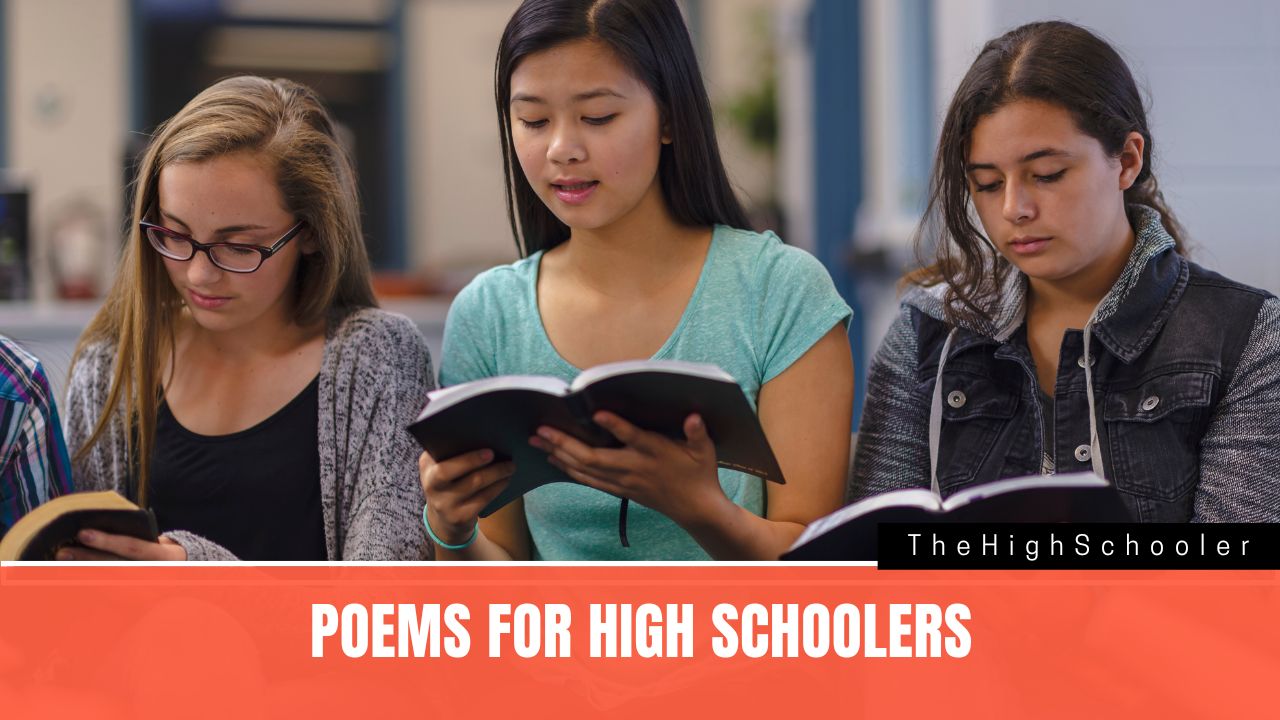 “Poetry enables teachers to teach their students how to write, read, and understand any text. Poetry can give students a healthy outlet for surging emotions”

Throughout history, poets have composed poems to convey their thoughts, feelings, ideas, and opinions about issues ranging from the nature of love or the beauty of a spring day to complicated social issues. Poetry is one of the most ancient arts and is often regarded as the highest form of literature.

No other art has influenced human civilization greater than poetry. It is for this very reason, poetry is taught in schools and colleges even today, starting from the early ages to the highest level of education in universities and so on. Poetry has a profound influence on the life of students and plays an important role in their development.

Here, in this blog, we have compiled a list of poems every high schooler must read.  All of the poetry in this collection is understandable. Any of these poems should have something to offer your students if they read them carefully.

‘If’ is one of the most famous poems by Rudyard Kipling, published in his 1910 book Rewards and Fairies. The poem is in the form of paternal advice from a father to his son, who teaches him to deal with different situations in life.

The father talks of several values and counsels his son to live with moderation, calm, and constraint, to constantly maintain his composure, and avoid overreacting. The speaker claims that by following these values, the son will become a real man.

Every high schooler should read this poem as it explodes with positivity for personal growth in difficult times. Even today, more than a century later, anyone struggling with a lack of desire in life can still benefit from Kipling’s message.

Bukowski’s poem is an excellent choice for all high schoolers as his poem ‘The Laughing Heart’ depicts an emotion that many kids will be able to relate to. The poem urges the reader to take control of their own life, seize opportunities and make the most of their time.

At the beginning of the poem, the poet talks about how one shouldn’t let others take their “light” out of them. Bukowski says that once you begin to show up for your own life, ‘marvelous’ things will begin to happen to you. The Laughing Heart, which focuses on risk and making decisions in life, appeals to youth as it serves as an encouragement to them to stand up for themselves in difficult times.

Still I Rise is an exceptionally powerful poem written by the American author and civil rights activist Maya Angelou. The poem is primarily about self-respect and confidence and focuses on the author’s experiences as a Black woman in America. ‘Still, I Rise’ is Angelou’s proclamation that she, for one, would not allow the hatefulness of society to determine her own success and hold her back.

Through this poem, Angelou talks about how she will overcome everything through her self-esteem. This poem is fit to be read by every high schooler because it encourages them to love themselves fully and persevere in the face of hardships.

Gwendolyn Brooks’ poetry “We Real Cool” was first released in her 1960 collection The Bean Eaters. The poem describes a group of teenagers as rebels who brazenly reject authority and convention—and who will probably pay dearly for their actions.

The poem can be interpreted as both a celebration of those who put their lives in danger to defy authority and as a cautionary tale about self-destructive behavior.

‘The Rose That Grew from Concrete’ is a poem by one of the most famous American rappers of all time, Tupac Shakur. The poem is about achieving our life goals despite the challenges and disputes we experience along the road. In this poem, Tupac compares himself to a neglected rose who went from being a marginalized inner-city teenager to one of the most influential rappers the world has ever known. The poem, thus, serves as an allegory of his own life. It is a must-read for every high school student because it will inspire and motivate the readers to focus and realize their dreams to make them come true.

The poem exhorts the sick and aged who are dying to valiantly resist death. The speaker of the poem offers advice on how to approach death with ferocity and dignity rather than resignation; he or she thinks that individuals should “burn and rave” as they get close to passing away. Even though human existence is frail and brief, the poem also honors its vitality and vigor.

The poem ‘Tattoo’ was written by the 13th Poet Laureate of the United States, Ted Kooser. The poem basically talks about lost love and young age as expressed through an old man’s tattoo. It illustrates how things from your youth are carried with you even when a lot of other things change as you get older.

These are dramatized by drawing a contrast between the tattoo’s original meaning and how, over time, the old guy has become just like any other old man. This poem is popular among high school students because the language used in the poem is simple and straightforward. Moreover, the symbolism of the tattoo provides an interesting topic of discussion in the classroom. The poem, Tattoo, will provide high schoolers who are reluctant to study poetry some confidence.

One of Robert Frost’s most well-known poems, “The Road Not Taken,” was written in 1915 in England, and it is widely recognized across the world. The Road Not Taken is basically about making choices in life. The speaker in the poem, faced with a choice between two roads, takes the road “less traveled,” a decision which he or she supposes “made all the difference.”

The poem illustrates the decisions that we make in life will influence our fate because our routes in life may frequently diverge. This poem teaches students the importance of our choices, both big and small since they shape our journey through life.

The poem ‘Fifth Grade Autobiography’ is from Rita Dove’s fourth collection Grace Notes. Through the poem, she discusses the fond memories of her most significant life influences as a child. She starts to recall the characteristics and recollections of her brother and grandparents throughout the poem merely by staring at the photo. By using language and pictures, she recalls how great and significant her family is as she looks at a photograph.

This poem is great for high school students as they can pick up important ideas and writing strategies by making effective use of imagery. Based on Dove’s poetry, an excellent activity would be to ask children to select a photo that is significant to them and write their own Fifth Grade Autobiography.

Mother to Son’ by Langston Hughes was first published in December of 1922 in the magazine, Crisis. It illustrates the challenges and risks one may encounter in life using the metaphor of a staircase. The speaker uses a long metaphor about climbing a flight of steps to advise her son on how to better his lot in a racist society.

Hughes uses the picture of the stairs to represent the concepts of social climbing—ascending the social ladder in terms of class, income, and cultural acceptance—as well as the difficulties of enduring when times are harsh. The poem is an important read for students because it teaches them to move forward in the face of hardships and difficulties.

Skills to learn through these words of wisdom

For young children, the force of a beautiful poem can help make reading a reality. Poetry is an important tool in any young reader’s literacy journey, serving a variety of functions from making reading enjoyable to giving kids new perspectives on phonemic sounds.

Important language and literacy abilities can be developed by reading and composing poetry. Students can then observe the virtually limitless ways that language can be used to express themselves and convey meaning. Although they may not have a wide vocabulary at first, poetry allows kids to play around with words without being constrained by strict grammar and syntax. Similar to reading, poetry offers students the chance to study and take in a variety of literary styles from numerous authors.

Writing poetry allows for a lot of creative freedom because it defies convention. It promotes imaginative language, structure, and imagery use. It challenges your kids to think outside the box and come up with original ways to communicate their ideas and emotions. Your kids’ exposure to a range of poetic forms will help them recognize the possibilities of poetry and stimulate their imagination and creativity.

Like reading other genres aloud, reading poetry aloud can help kids develop their reading abilities. Children who read aloud develop their reading skills by giving greater thought to how the words sound as they speak. Because poetry is rhythmic, expressive, and entertaining, it is the ideal medium for reading aloud. The performance of poems by your students will boost their public speaking abilities and self-confidence in front of an audience.

Poetry is often a crucial part of the english literature, that can be opted by the interested students as a freshman year class. Poetry has numerous advantages for authors, readers, teachers, and students alike. Some students object to learning poetry because they believe it to be uninteresting and meaningless because it is too tough to understand and compose. Talking about the advantages of reading and producing poetry with students can make the experience more pleasurable and help everyone understand the significance of this topic of study.