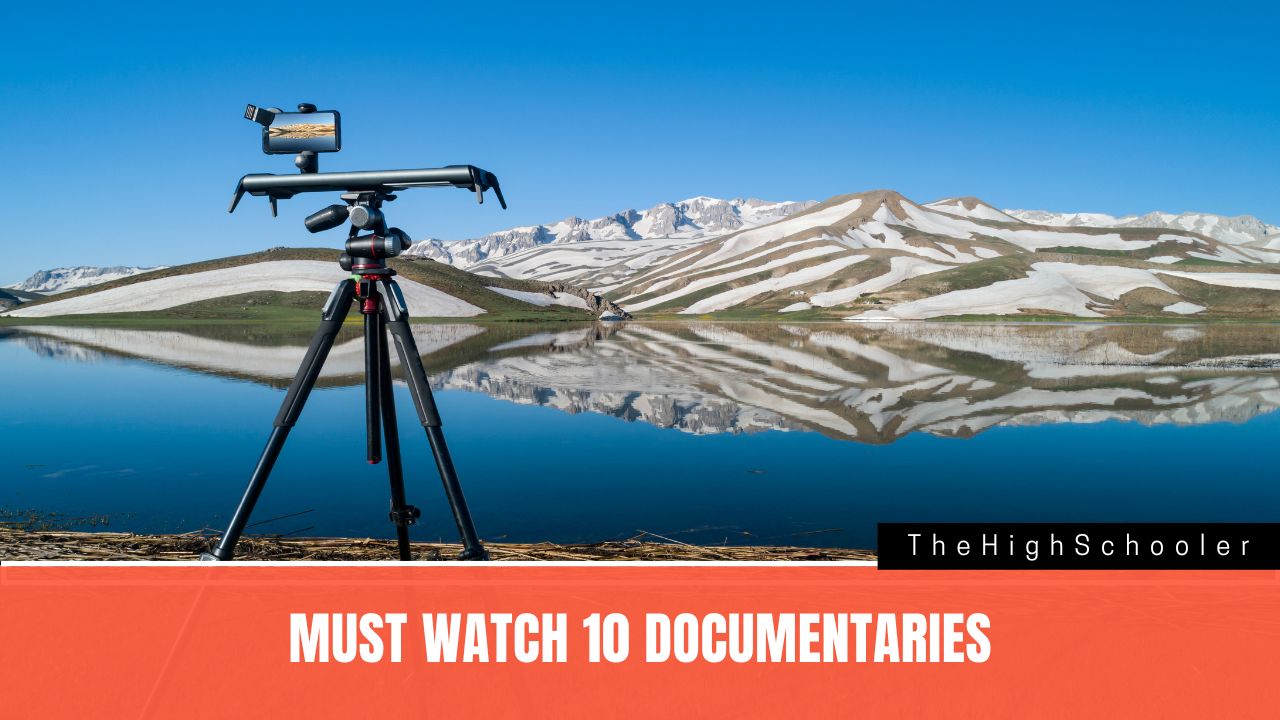 A tiger running towards a deer, and a deer running towards the bushes to save its life, we all have learned bundles from documentaries and docuseries, as the visual representation teaches us more than what we can learn through other mediums. Furthermore, in the digital generation, where audio video has become an essential and inevitable part of our lives, documentaries can be used to provide knowledge to young minds.

With education through documentaries and movies available right through the screens of our phones and the tips of our fingers, it is no more a tough task to inculcate a particular concept in kids. Just like a few inspirational movies, some documentaries too can leave a huge impact on young minds.

Therefore, in this post, we will give you a thorough rundown of the ten best documentaries that every high school student needs to watch. If you love binging on shows, this is an added brownie point.

Released in 2019, this 50 minutes documentary depicts the glorious beauty of our planet Earth and gives us a threatening glimpse of how climate change is negatively affecting all its inhabitants. Because it perfectly showcases the gloomy reality of global warming, it becomes a perfect show for high school students.

Students are the future of the world; therefore, they need to know of all the human activities that are endangering our present and future. This show could motivate them to look for viable solutions to this global environmental crisis.

Directed by Patrick Creadon and released in 2013, If You Build It follows an innovative, design-based high school program that concludes with the design and construction of the only farmer market’s pavilion in the US designed and built by high school students.

This documentary is remarkable for showing how young people can accomplish a lot if given the opportunity and inspired in the right direction.

This documentary is a manifestation of the director’s personal epiphany. The film saw the light of day when its director Vicki Abeles discovered that the pressure of school, homework, tutoring and extra-curricular activities was making his middle school daughter physically weak and mentally tired.

Released in 2009, this film is a wake-up call for all students and parents to take it easy in high school. We are sure our high school viewers will completely relate to the personal tales of all the characters.

Everyone must have heard of the great bee prediction made by Albert Einstein. He stated that humanity would go extinct within four years if they suddenly disappeared from the Earth. Unbelievable, right? But facts have something else to say. Pollination accounts for about 80% of crop plants in the world.

And bees, birds, and bats play an essential role in pollination. The documentary shows a bat, bee, butterfly, and hummingbird unknowingly helping the process of pollination. This documentary will deeply impact the viewers by making them conscious of the environmental changes happening around them and acting when we still have time.

Blackfish follows the story of a whale named Tilikum, who was mistreated at SeaWorld. This documentary is remarkable for its take on animal rights. It shows how animals feel when they are ill-treated. The main aim of this documentary is to show the consequences of human control of nature. The major takeaway from this documentary will be a profound understanding of how to treasure nature and respect it as it is.

A newfound understanding of animal rights and the immorality ingrained in the act of using animals for human interest is another lesson to be gained from this documentary.

6. Minimalism: A Documentary About the Important Things

The great American Dream associated with the rise of the industrial revolution and capitalism has taken a wrong turn for the worse. The present we live in today wasn’t what we had imagined in the great American Dream. Our present reality is sad and hopeless. But is there a way to change it for the better? Minimalism shows the need to take control of our lives.

It tells us to ditch the materialist life to take control of our time and money. This enlightening documentary is a must-watch for high schoolers because it rightly depicts how one can live a happy life in easier and non-materialistic terms.

Directed by Gret Whiteley, Resolved is a 2007 documentary film that follows the lives of two high school policy debate teams and their journey through the highly competitive world of debate. Along the way, the documentary also uncovers the equally complex racial and class bias of the American education system.

At the end of the documentary, the viewers are left s with a host of questions on the nature of social justice and resistance to oppression.

8. They Shall Not Grow Old

They Shall Not Grow Old is a documentary based on World War I.  Released on October 16, 2018, the film shows some untold stories from the first World War. In this documentary, you can see the stories of soldiers in their own voices.

The most interesting feature of this documentary is that it does not have any narration; the soldiers themselves have done voice-overs for the scenes. This documentary is highly enlightening to watch if you are interested in learning the histories of the wars.

Getting to school is no easy feat, and this documentary shows it. On the Way to School is a 2013 documentary in which four kids from different parts of the world — Jackson from Kenya, Zahira from Morocco, Carlto from Argentina, and Samuel from India — are filmed traveling tremendous lengths to attend school.

Not only should this put things into perspective for kids prone to complaining about going to school, but it also might even humble parents (or grandparents) fond of telling “When I was your age, I walked two miles to school each day” anecdotes.

Released in 2005, The Mask You Live In is an excellent documentary that aptly represents how our society plays an important role in assigning the role of masculinity to young men and boys. The story shows how men take to violence to resolve their internal conflict between conforming to society’s expectation of masculinity and giving in to their emotional needs and sensitivity. It encourages boys to be true to their emotions.

It leaves the viewers with the message that a child’s character, likes, and dislikes preference should not be based on their gender. Watching this documentary will make you rethink gender as you have understood it all this while.

Documentaries as a motivation tool

Do you remember watching documentaries as a kid and young adult? Remember when the schools used to take the kids to theatres to show them a particular documentary? Well, thanks to technology, we can now have access to loads of content right through our phones and laptops. Therefore, the new age medium of learning, documentaries serve as an educational tool that motivates kids to learn through watching films.

Unlike fiction, documentaries can capture unscripted insights into humanity and show us our world, raw and unfiltered. These human stories then become drivers of change by creating understanding, empathy, and action where straight facts often fail. Incorporating media like documentaries and films into your traditional study ritual can enhance your interest and foster fresh motivation to accumulate more information.

Therefore, you can gain more enhanced information by not limiting yourself to traditional textbooks. Moreover, documentaries can also give you an in-depth perspective on the issue it discusses, which can move viewers to action.

The development of technology is undoubtedly the best innovation in terms of improving the quality of learning in the classroom. Now, students can learn in class and at home or anywhere. In fact, many documentaries can be on the bucket list of many students. They are also not only limited to learning from their textbooks and not only studying from their teacher. Just study anything that interests you, and don’t limit yourself to textbooks only. Sometimes, an exploratory dip in another medium of study, like watching a documentary, could be the best way to learn and understand new things.