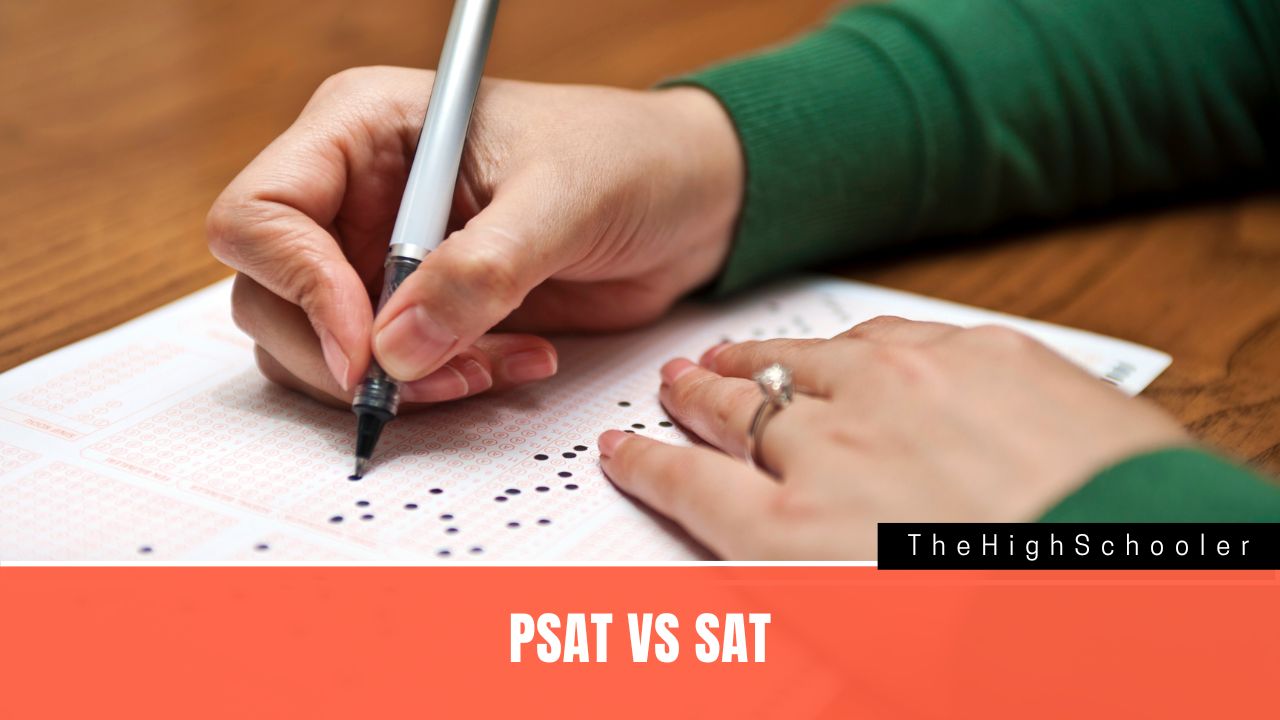 If you’re a high school student, chances are that you’ve heard of the PSAT and the SAT. In fact, the possibility is high that the two are on most children’s bucket lists. It’s often called the pre-SAT test and is typically taken by juniors in their junior year of high school. The PSAT scores are used to determine eligibility for National Merit Scholarships and other scholarships from colleges.

But what about the SAT exam? This is another standardized test that many students take during their junior year in preparation for college admissions testing.

With both tests being so crucial to a student’s high school career, we have decided to cover the critical points of differences. In this post, we will compare them side-by-side so you can decide which one might be the best fit for you.

Often time, parents and students end up comparing GEDs with SAT; however, evaluating the difference between PSAT and SAT is also imperative. In the simplest of terms, the PSAT is a test that helps you get ready for the SAT. The two tests are important for college admissions, but it’s important to know each one, how they work and how to study for them.

PSAT stands for Preliminary Scholastic Aptitude Test. It is also referred to as “PrenSAT” or “PrelimSAT.” The name of this test changes yearly depending on when you take it and which exam you take (there are three versions). We call it just plain “PSAT” in this guide because we can make explicit references between both versions without confusing anyone with abbreviations such as PrenSAT or PrelimSAT.

The SAT stands for Scholastic Aptitude Test. It is often referred by its acronym alone since most people already know what kind of test it is (an aptitude test).

PSAT is a practice test for the SAT, which is applicable only to high school students. Students take the PSAT in 10th or 11th grade. Whereas students in grades 11th or 12th take SAT.

The PSAT is an exam that can be taken by all American citizens who are currently in high school or planning to go to college. On the other hand, the SAT is an international college entrance exam that measures your knowledge of reading comprehension, writing, math, and critical reasoning skills to evaluate how well you’ll fare in college courses.

The SAT is used not only as a measure of academic achievement but also as one of several factors considered by universities when assessing applicants’ qualifications for admission into undergraduate degree programs.

Is One Tougher Than the Other?

The PSAT is a more critical test than the SAT because it determines whether you are eligible to be considered for National Merit Scholarships. The results of your PSAT will also determine if you can participate in the National Writing Competition and/or compete in Westinghouse Science Talent Search.

The SAT is a better predictor of college success than the PSAT, but it’s more complicated. The PSAT will ask fewer questions on challenging topics such as geometry, statistics, and other additional math topics. And, because the PSAT Reading section asks fewer questions over a shorter amount of time without reducing the number of passages, the timing (arguably one of the most critical factors in taking the Reading section) will be markedly different from the SAT.

It’s also important to note that students who take both tests don’t have an advantage over those who only take one or the other.

Is a PSAT score equivalent to SAT?

The PSAT is used to help determine eligibility for National Merit Scholarships and often includes some of the same questions as the SAT. It may also be used by colleges to determine if they want you to take their own version of an entrance exam after graduation from high school. However, these tests are different in several ways:

Is there a downside to taking the PSAT and SAT?

Yes, there are a few downsides to taking the PSAT and SAT. Since the tests are so important to college admissions, you should be aware that colleges will see your scores if you take them. While this is not a significant issue for many, it could be for some students who prefer to keep their scores private.

Additionally, if you are considering taking the PSAT just to get an idea of how you will fare with SAT, then you should rethink your choice. Both tests follow different formats, durations, and difficulty levels, so the PSAT is actually not a good indicator of your SAT score. Instead, you should consider taking PracticeSAT.

And if in case, your only aim is to land a good college, then you should focus only on SAT than doing both SAT and PSAT. In the end, it comes down to what you wish to gain by giving the test. If you are clear on your goal then you shouldn’t have a hard time choosing the one that fits your goal.

PSAT or SAT: Which one is more crucial for scholarships?

Undoubtedly, the PSAT is the most important exam to get your name listed on the National Merit Finalist list and get awarded a scholarship. However, getting the scholarship is more challenging than it sounds. According to the data published by the college board, more than 4.5 million high school juniors took the PSAT in 2021, but the National Merit Scholarship selected only 7,500 finalists. That’s less than a fifth of a per cent.

A high enough score on the PSAT will get you the chance to become a National Merit Finalist or Semifinalist, but remember that out of the over 1.4 million students who took this test in 2014, only 16,000 moved on to the Semifinalist level, and only 7,600 of those became Finalists.

To make matters even more challenging, the National Merit Scholarship Corporation chooses Semifinalists based on “a state-representational basis,” meaning that if you live in a densely populated state, such as California or New York, your chances of becoming a Semifinalist are that much slimmer.

The PSAT and SAT are essential for students who want to improve their test-taking skills. If you are considering applying for scholarships, make sure you know the difference between these two exams and decide which one is best for your needs. This can be tricky because each exam has pros and cons, but ultimately, it will come down to what type of student you are—one who likes timed tests or prefers open-ended questions.